Ray Nix retires on 42 not out

With a career strike rate which would make Joe Root jealous, our renowned Estimator, Ray Nix, today shuts down his spreadsheets for the final time.

Having left school in his native Buckinghamshire to join Cementation’s Rickmansworth Laboratory team in 1969, Ray’s career saw him move from undertaking site technical roles to pricing projects before he joined Norwest Holst in Leeds. Over the following 40+ years Ray has been involved in pricing and winning work on some of the UK’s largest and most prestigious projects, from NIREX to HS2, the M74 completion to Thames Tideway, and many of the UK’s widest ranging framework contracts.

Ray’s legacy within the industry isn’t just of winning great projects, and ensuring that Norwest Holst, later Soil Engineering, remained a stable business, but is also one of mentoring and development. Responsible for shaping the way the preconstruction department has worked for over 40 years, and training up many leading “work winners” throughout the industry, Ray has built a legacy that stretches beyond Soil Engineering, and into estimating and senior management roles across the sector.

Renowned for his no nonsense attitude towards providing prices to clients, Ray has always maintained a keen interest in industry trends and developments. The advent of social media has not only made it much easier to keep up with what’s going on in the sector, but given rise to a familiar refrain of “Have you seen this on LinkedIn?”. Well now it’s Ray’s own turn, as he gets to star in his very own post.

Ray’s interest in the mixed fortunes of the England Cricket Team will no doubt keep him busy in the absence of tenders, and his work family will make sure he’s still up to date with a business and industry that’s occupied him for so many years. He’s claimed that “after quarter past five I won’t give a s***”, but they don’t believe him.

We’re all very grateful for Ray’s magnificent innings, his hard work has literally made hundreds of careers. 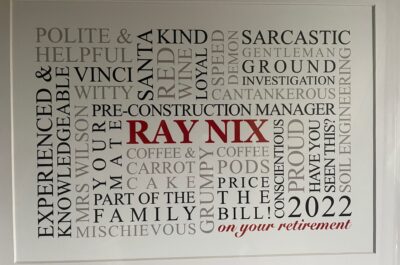 Ray Nix retires on 42 not out 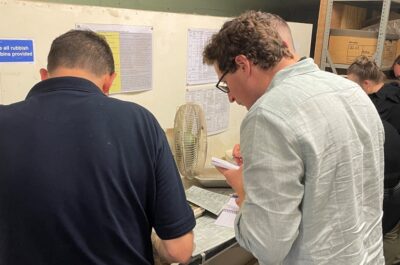