Soil Engineering Geoservices Limited undertook the Ground Investigation works at the A720 Sheriffhall Roundabout, as part of the project to replace the existing at-grade roundabout with a grade separated interchange. Sheriffhall Roundabout is located on the A720 Edinburgh City Bypass, approximately 8km southeast of Edinburgh and 2km northwest of Dalkeith, and forms a major bottleneck in the regional transport system, with long delays at peak times.

The proposed ground investigation involved work on and adjacent to an approximately 2600m long stretch of the existing A720 dual carriageway trunk road and Sheriffhall Roundabout, together with associated works on the local road network (A7 and A6106) which ties-in to the existing roundabout.

With the appropriate Coal Authority license in place, the investigation comprised the formation of 92No. cable percussion boreholes, 33No. rotary drilled boreholes and 7No. sonic cored boreholes together with pavement cores on the A720/A7/A6106, trial pits and mine entry investigation trenches. In situ testing including geophysical surveys, televiewer surveys both acoustic and optical, DCP’s, permeability testing and GPR surveying of service utilities along with gas and groundwater monitoring was also undertaken.

The majority of the fieldwork was carried out between 12th February and 24th August 2018. Additional surface geophysical surveying was completed between 8th and 12th October 2018, with a further phase of intrusive works planned for Spring 2020.

The operations were undertaken on, or adjacent to, existing highways and in close proximity to agricultural land, commercial and residential properties which required thorough advanced planning and liaison with all interested parties. 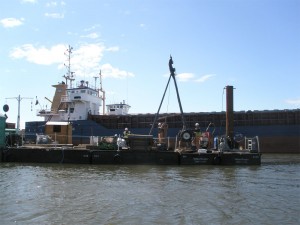 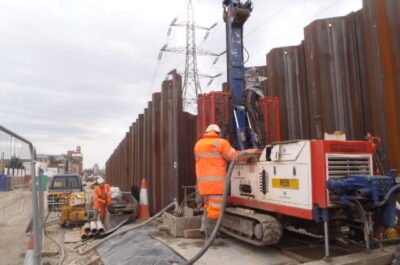