As part of the Scottish Government’s Infrastructure and Investment Plan 2011 a commitment has been made to complete dualling of the A9 trunk road between Perth and Inverness by 2025. The A9 forms an important part of the trunk road network and is a strategic link between Perth and Inverness. The benefits of this project will include economic growth, improved road safety, improved journey times and reliability.

The Tomatin to Moy section comprises widening the existing A9 to provide dual carriageway over the 9.9km length of the site, in both the southbound and northbound directions by means of benched-in extensions to existing embankments and cuttings. The replacement and / or improvement of existing underpass structures and culverts will also be required as part of the scheme.

The objective of the ground investigation was to provide a sufficient level of geotechnical and geoenvironmental information on the underlying soils and rock, groundwater regime, the presence of quarrying and mining, and the level of contamination along the proposed section.

The investigation works were undertaken on or adjacent to the existing A9 carriageway and the Highland Mainline Railway. On the site were large areas of evergreen trees and ancient woodland as well as a number of water courses and environmentally sensitive areas. Due to the environmentally and culturally sensitive area that SEGL were working in there was a full-time attendance from an ECoW and ACoW on site working alongside the drilling crews.

The additional ground investigation comprised the formation of 33No. cable percussion boreholes 11No. of which were extended by rotary drilling techniques, as well as the formation of 55No. sonic boreholes, 111No. trial pits and in situ testing including Optical / Acoustic Imaging Scanning of Boreholes, Hand Vane and Pocket Penetrometer Testing, Variable Head Permeability Testing and Standard Penetration Tests.

With springtime working inevitably encountering harsh weather conditions our crews were equipped with all-terrain welfare vehicles, and additional PPE arrangements, to ensure their safety in the cold snap which dominated spring 2018. 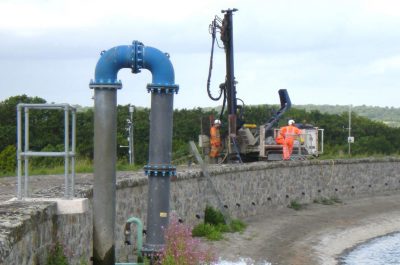 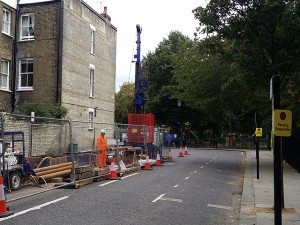 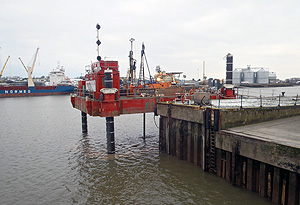